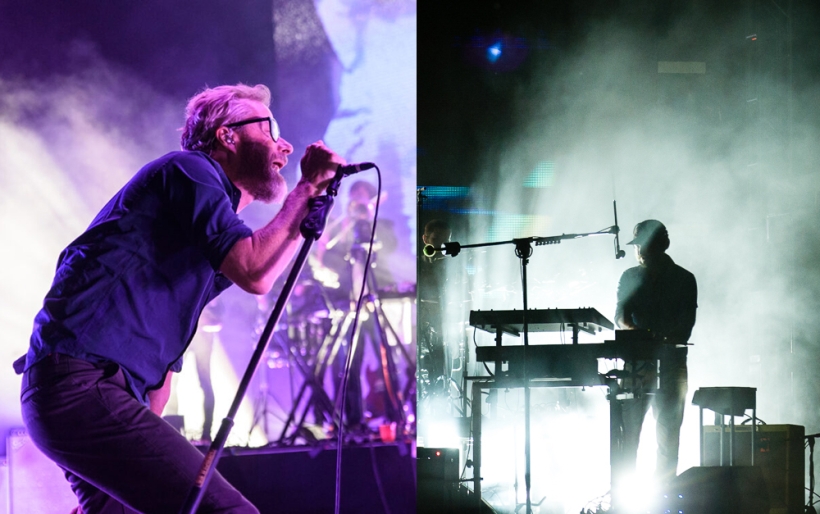 The National and Bon Iver team up, finally, on new single “Weird Goodbyes”

This ballad, featuring vocals from Justin Vernon, taps into both bands’ embraces of electronica and brushes with the mainstream.

As two of the defining presences in indie music for the past decade-and-a-half, the intersections between The National and Bon Iver’s Justin Vernon have been numerous.

Vernon appeared on Taylor Swift’s Folklore and Evermore, both of which were produced by National multi-instrumentalist Aaron Dessner, and Dessner and Vernon also have their own side project called Big Red Machine. The two bands even founded the Eaux Claires festival together, which makes it all the more remarkable that “Weird Goodbyes,” released yesterday  on 4AD, is their first official studio collaboration.

In form, the song is closest to the digitally modulated balladry of 2017’s GRAMMY-winning Sleep Well Beast, opening with the off-kilter clip of a drum machine that’s soon joined by melancholy piano chords, flickers of ghostly ambience, and string accompaniments courtesy of the London Contemporary Orchestra. What sets “Weird Goodbyes” apart is Vernon’s soulful croon, and how it works as a counterpoint to lead singer Matt Berninger’s cryptic deadpan. It’s reminiscent of the appearances by Gail Ann Dorsey and other female vocalists on The National’s last full-length, I Am Easy to Find.

Perhaps inspired by both bands’ recent crossovers to the pop mainstream, thanks to their Swift co-signs, this new single feels more radio-ready than I Am Easy to Find or Bon Iver’s i,i. After all, Aaron Dessner was credited as a co-writer on most of the songs from Folklore. Maybe he picked up some tricks about how to make a song’s chorus really pop — or maybe, he’s always had those muscles and decided to flex them a little more this time.

Still, when it comes to the lyrics, this is textbook National: middle-aged malaise, heartbreak that’s indistinguishable from romance, and visceral sensory details (the chorus revolves around a couplet of “I’m pullin’ over until it heals / I’m on a shoulder of lemon fields”). In a press release, Berninger said “It’s about letting go of the past and moving on, then later being overwhelmed by second thoughts.”

All this unsurprising for a song called “Weird Goodbyes,” which is possibly the most National-esque name for a National song ever.