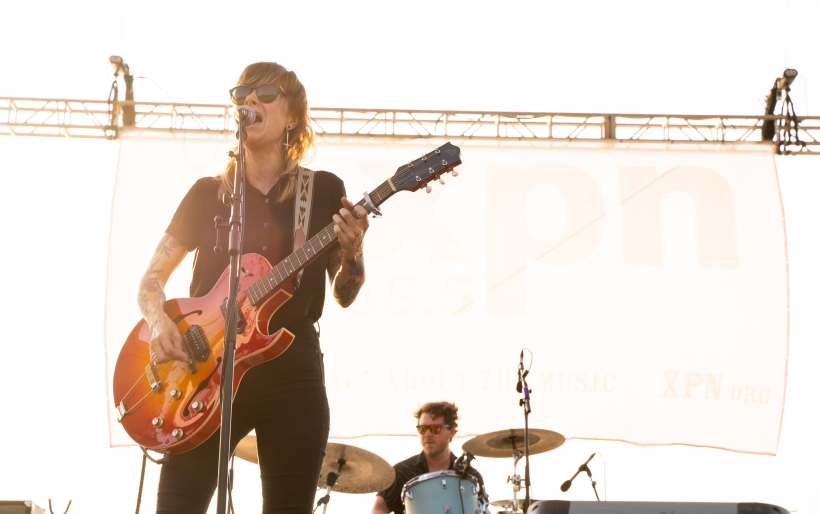 Sarah Shook and the Disarmers | photo by Ellen C. Miller for WXPN

Together, the Disarmers make up a veritable Breakfast Club at XPNFest today, and Sarah Shook is the lovechild of Molly Ringwald and Ally Sheedy.

Happy birthday to Sarah Shook, who tore up the River stage at XPNFest today with their country-rock outfit, the Disarmers. They play good old fashioned rock ‘n’ roll for people who love train shuffles and pedal steel; who think that one guitar solo in a song just ain’t enough. During their set, the band covered about four decades of music history.

Together, Shook and their bandmates look like they stepped out of five different franchises: there’s the smiley, western shirt-clad bass player, the nerdy pedal steel guy wearing a baseball cap, the frat bro drummer in mirrored sunglasses, and the cool guy guitarist with the shaggy hair. Together, they make up a veritable Breakfast Club, and Shook is the lovechild of Molly Ringwald and Ally Sheedy. Once they started to jam, though, they were in perfect sync.

Shook led the band through numbers pulled from their album Nightroamer, released this year, with a too-cool-for-school affect, totally in tune with every single changeup. The songs touched down in rollicking, chicken-fried country (“Good as Gold”), power pop (“Been Loving You Too Long”), stadium rock (“No Mistakes”), and even sludgy grunge in the apocalyptic noise jam at the end of closer “JCBC.”

Everyone was playing red hot, but the runaway surprise star was actually the band’s pedal steel player. He made the instrument rock, bringing texture and color to the best song of the show: the deadpanned grimy country waltz “If It’s Poison.” It was an oil-slicked ballad that sounded like it could catch fire any second. Shook’s songs are the stuff of classic rock—working for the man; vices and virtues; “If It’s Poison” is about the follies of love—but they sounded right at home alongside the rest of today’s bands.

Sarah Shook and the Disarmers are playing Milkboy in Philly on November 12th. Listen to their performance and check out a photo gallery below.