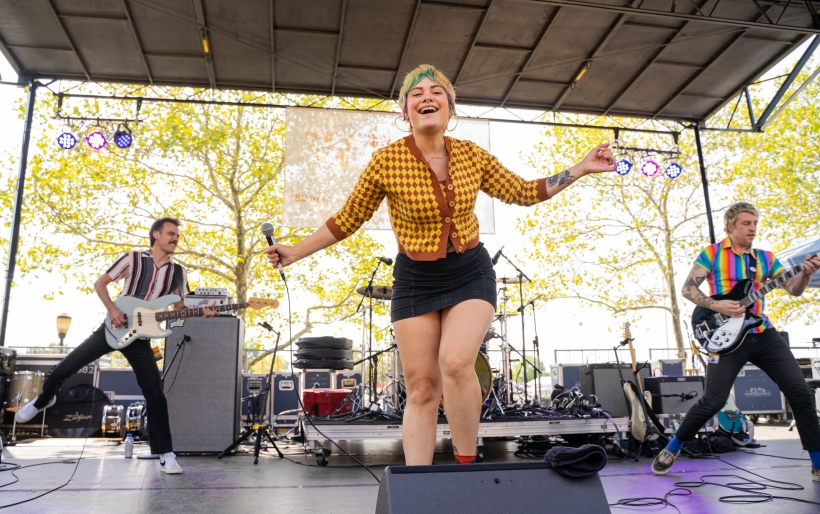 Catbite are from Philly, so their take on ska is more edgy, less buttoned-up, and all the better for it.

“HEY XPONENTIAL, I’M GONNA COUNT TO THREE, AND I WANT EVERYONE TO SCREAM WITH ME!”

That was Catbite’s lead singer Brittany Luna, right before launching into “Not Ur Baby” at the top of the band’s Marina stage set. In a way, the bands were today’s honorary ambassadors of the Ska revival that kicked off somewhere around Jeff Rosenstock’s SKA DREAM last year. But Catbite are from Philly, so their take on the genre is more edgy, less buttoned-up, and all the better for it.

As a frontwoman, Luna had enough energy to power the entire city of Camden for as long as the band kept playing. She was ridiculously charismatic — flirty and funny on “Bad Influence”, showing off vocal acrobatics (For part of “Creepin’” she sang so fast she was practically rapping) and some actual acrobatics.

For “Scratch Me Up,” she led the crowd in a dance where they put their hands in the air like a paw in the air and scratched. Luna commanded the audience to dance and clap, but they didn’t need that much instruction after a while. The drums especially worked like gangbusters to get everybody moving, banging out groove after irresistible groove.

Now, about the hooks. These nine songs, played in under half an hour, had hooks for days, months, years. The hooks are the key to why Catbite is so good. I’ll have some of these tracks stuck in my head for next week, minimum. Stickiest of the punch was the chorus of closer “Excuse Me Miss,” which goes “Excuse me miss but after this kiss / Where do I fall upon your list?”

So two out of five of the members have frosted tips, but Catbite get it. Ska is supposed to be the enemy of pretentiousness, and Catbite sure as hell isn’t above having some fun.

At the end of their set, the band tragically had to cut a planned cover of No Doubt’s “Sunday Morning,” but Luna wasn’t fazed. “You’ll just have to see us again,” she said. For now, you can listen to their performance and check out a photo gallery below.