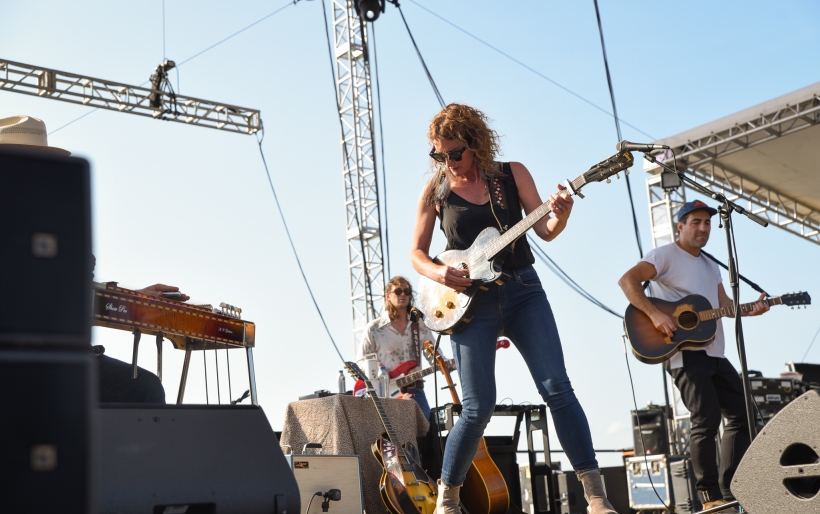 It was the Canadian singer-songwriter’s fourth appearance at XPN’s festival.

It’s as hard for us to believe as it is for the singer herself, but we’re coming up on 20 years since Kathleen Edwards’ introduction to the WXPN universe with her stellar debut Failer.

At her River Stage set today — the fourth appearance she’s clocked at the station’s festival, previously playing in 2019, 2012, and 2003 — Edwards spent some time reminiscing about the past, introducing her first big hit “6 O’Clock News” with a strange story about rushing up and down I-95 on a cold January day to load in at The Point (RIP), head to Manhattan to tape a performance on Letterman, and get back to Bryn Mawr in time for the gig.

There was certainly an element of looking back in this set: Edwards also played Failer’s “Hockey Skates” and “Mercury,” and did a more recent interpretation of The Band’s “Evangeline” she’ll be singing on a Last Waltz tribute tour this fall. (See it at The Met in November.)

But Edwards’ set today was very rooted in the now, and the future, with a whisper-to-wail dynamic range. “Simple Math” from her most recent album, 2020’s Total Freedom, started things off quiet and acoustic, with Kinley Dowling’s violin and Aaron Goldstein’s pedal steel making nuanced entrances. “Options Open” simmered and soared, and the rhythm section of drummer Peter Von Althen and bassist Ryan Gavel kicked into overdrive on “Glenfern,” conjuring Fleetwood Mac’s “Dreams” and The Killers’ “When You Were Young” in equal measure.

While some parts of Edwards’ set leaned especially subdued and melancholy — like the breathless “Goodnight California” from 2008’s Asking For Flowers — she brought it up in glorious form, as she as an especial knack for. “Hard On Everyone,” a Total Freedom standout, closed the performance by whirling all the moving parts together for a resplendent jam that blossomed higher and higher still until we hit a peak that can only be described as pure classic Kathleen.

Listen below. We can’t wait for Edwards’ next appearance at XPoNential, at which point she’ll be presented with a five-timers’ jacket.