Jerry “The Geator” Blavat | photo courtesy of the artist

The legendary disc jockey had made music his life and passion for over six decades.

This morning we’re sad to report the passing of Philadelphia radio icon and WXPN host Jerry “The Geator” Blavat, a rock and roll pioneer who introduced listeners to their favorite bands and inspired them to dance, sing, and fall in love. WXPN has confirmed the news with a family member. He was 82 years old, and had worked as a DJ in some capacity for 62 of those years, but as Blavat would be the first to tell you, the numbers don’t matter, because music keeps you young.”Keep on rocking,” he’d say, “because you only rock once.”

Blavat built his devoted audience by crafting personal connections between himself and his fans, and between his fans and one another — by making them realize they were part of a community that grew together and kept close ties to that spirit that connected them as “yon teens.” He created the understanding that music and memories are intrinsically tied.

“I don’t just play music,” Blavat said in an interview with WXPN last year. “Music tells a story about life. My audience back then, as the audience of today, identifies with the song. It speaks for the human experience.”

Born in South Philadelphia in 1940, Blavat caught the show business bug early, boogieing into the spotlight as a dancer on American Bandstand at age 13. Dancing to his favorite records for the camera was an act of joy, but was also a response to a rocky childhood. As Blavat told SJ Magazine in 2011, “I came from a broken family. My father was a Jewish bookmaker and my mother ran away to marry him. In those days – 1937, ’38 – you didn’t marry out of your faith. I lived a different life than most kids at that time because my father was never around and my mother had to go to work as a riveter in the navy yard during the Second World War.” Blavat described a lonely childhood, being sent to bed at 6 when he knew other kids his age were still out playing, because his mom had to go to work. The solace he found was radio — and the R&B, soul, and early rock and roll he found on its dial — and dancing on Bandstand “meant an opportunity for me to go out and do what I loved to do.”

When he was 16, he went on the road for the first time, tour managing Philadelphia doo-wop group Danny And The Juniors a year ahead of their breakout hit “At The Hop.” He amassed a collection of 45s of his favorite current hits and the hits of a few years prior — he often used the word “oldies” to describe them when, at the time he began playing them for crowds at local dance parties in South Jersey, they were maybe only a few years old.

His first break in radio came in the winter of 1960, when the 20-year-old music fanatic legendarily — by his own account — won an hour slot on Camden’s WCAM radio in a craps game. He related that story in that SJ Magazine interview:

When it came time to do the radio show, there was a big snowstorm. I took all of my records, the music I listened to – Fats Domino, Little Richard, Chuck Berry, Danny and the Juniors – to the studio. The DJ who was supposed to replace me couldn’t make it in the storm, so I started to play my music. The snow kept coming down and the kids were surfing the dial to see if they were out of school the next day. For the first time, they’re hearing my oldies, but to them it was brand new. The phones lit up and I finally got out of there three or four hours later. The station manager called and said he never had a reaction like that.

Blavat became a regular fixture on ‘CAM, hosting his show from the the station’s studios on the top floor of Camden’s City Hall — which led to one of his many catchphrases; “the jock who rocks the Big Tick Tock from the Tower of Power Clock.” He also became known, belovedly, and “The Boss With The Hot Sauce” and more commonly “The Geator With The Heater,” a nickname he picked to keep in step with other popular Disc Jockeys of the day; he saw it as a derivation of “alligator,” for his ability to snatch up the audience, plus “heater” for its rhyming qualities.

One of his early devotees was musician, podcaster, and history buff Ben Vaughn, host of The Many Moods of Ben Vaughn on WXPN. As he set the scene in his Lost Dedications special with Blavat in 2021, WCAM’s signal at 1310 a.m. did not carry very far geographically “but his music-obsessed fans have figured out that the station’s transmitter is located near the Jersey bank of the Delaware River. So every night a ritual is played out.  Philly teenagers drive to the Pennsylvania side of the river to  sit in their cars,  groove to the music and hear their requests and dedications.  It was a magic time.”

In his first three years on the air, Blavat moved from WCAM to WFIL, branding his program The Discophonic Scene and getting it syndicated all across the Delaware Valley region, from Atlantic City to Pottstown, Trenton to Wilmington, and he cultivated his fan base further by taking his dance parties around the region. The show became a Bandstand-esque television program on WFIL in Philadelphia from 1965 to 1967, and helped break the careers of The Four Seasons, The Isley Brothers, and many more. His love of music led to his partnership in local record labels Lost Nite and Crimson Records, where he released compilation albums of his favorite songs of the moment — occasionally recording his own songs, some of which made their way to more prominent labels like Cameo Parkway. 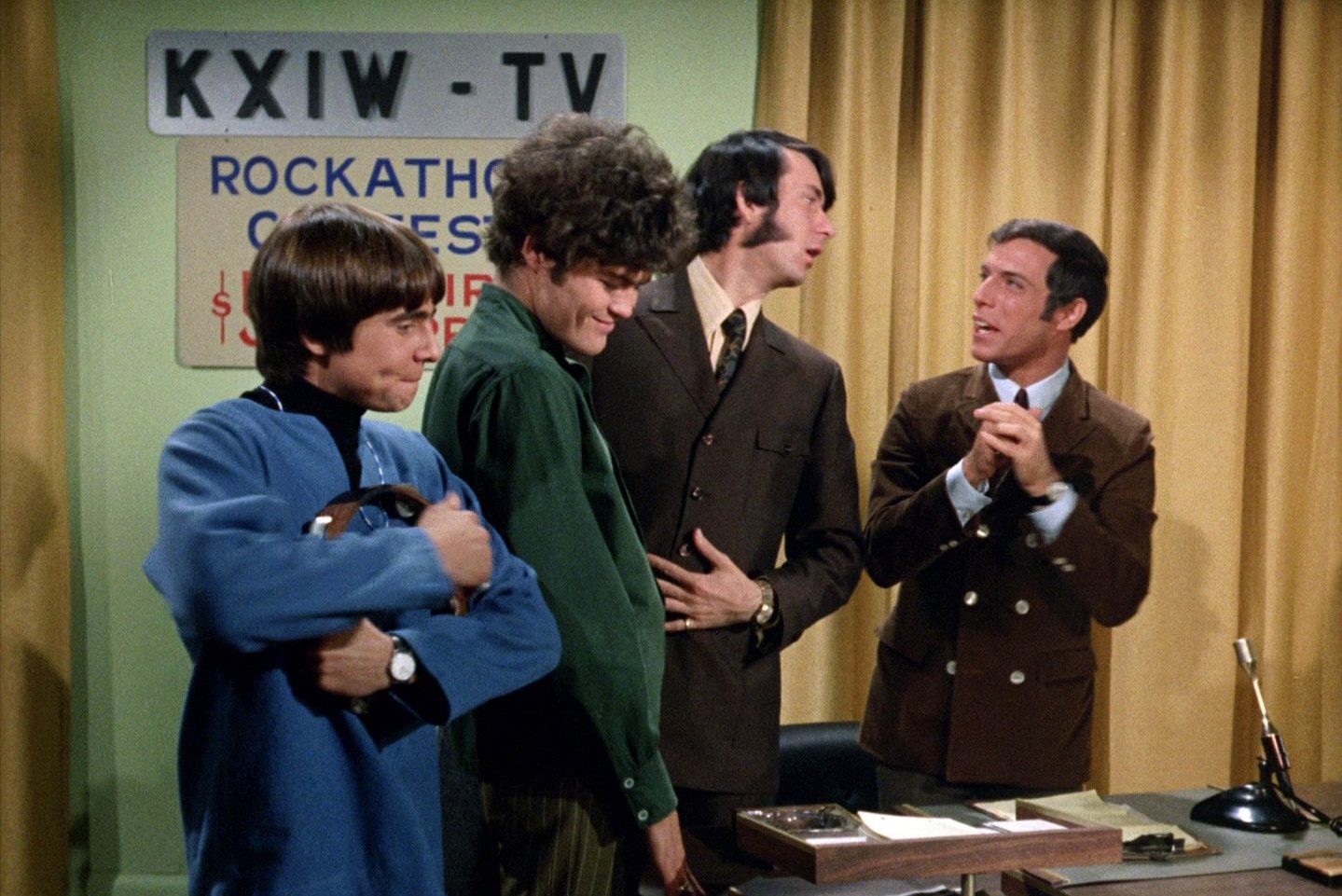 Jerry Blavat, at right, with The Monkees | still from video

Blavat’s rising star took him back to other areas of the television screen — he was in a 1968 episode of The Monkees called “Some Like It Lukewarm” — as well as the silver screen — look for him making cameos in Desperately Seeking Susan and Rocky V. As oldies radio gained serious steam in the 70s and 80s, he found new homes at WOGL and later at WXPN, all the while hosting dance parties around the region, and in particular at his Margate, New Jersey nightclub Memories, which he opened in 1972. Beginning in 2002, Blavat threw extravaganza concerts at the Kimmel Center in Philadelphia with reunited doo-wop and rock artists — like his 60th anniversary bash in January of 2020 with Gary U.S. Bonds, The Chi-Lites and more.

In an interview with WXPN ahead of that show, he described the heart of those showcases as “showbiz. Classic showbiz, the likes of what you used to be able to see with a Sammy Davis Jr. or a Frank Sinatra. Something wonderful that you can’t find any more, and anywhere else.”

Blavat collected his own memories in a 2011 memoir You Only Rock Once: My Life In Music, but perhaps the biggest wave of memories came in 2021 during The Lost Dedications. The program sprung from a box of letters that Vaughn and Blavat discovered while cleaning out the Market Street office space of his Geator Gold Radio in preparation for a move. The letters were all dated 1962 and written by fans who wanted the Geator to play specific songs on the radio, and send them out to friends and family, crushes and loved ones alike.

“ I couldn’t believe it,” recalled Vaughn in an interview ahead of the program. “ It was fascinating. Mostly, I was struck by how personal some of the writing was.  The ‘yon teens’ really looked up to the Geator. They trusted him.”

Many of the letters were opened; one particular bundle was not. So for a poignant hour of radio — the kind that only Blavat can orchestrate — they opened the lost dedications, one by one, read them live on the mic, and played the songs these fans from a half century ago wanted to hear.

Many Moods · THE LOST DEDICATIONS with Jerry Blavat and Ben Vaughn

Blavat has received numerous honors, both locally and nationally; he was inducted into the Philadelphia Music Alliance’s Hall of Fame in 1993, he was featured in permanent exhibit at the Rock & Roll Hall of Fame that opened in 1998, and he was honored on the Broadcast Pioneers of Philadelphia’s Hall of Fame in 2002. His show The Geator’s Rock and Roll Rhythm and Blues Express has had a home right here on WXPN for over a decade, and this Saturday, January 21st, we’ll honor his legacy from 2 to 7 p.m. with a Geator Marathon.

Reflecting on his career in conversation with WXPN in 2021, Blavat said “You know, I look back on my life, and I’m one of the fortunate people in life, because I never worked a day in my life. I played music, and through my music and [the fans], it makes it worthwhile, the journey…knowing that I had the freedom to make people happy.”