On the XPNFest Marina stage, Tamino was more than just a pretty face - WXPN 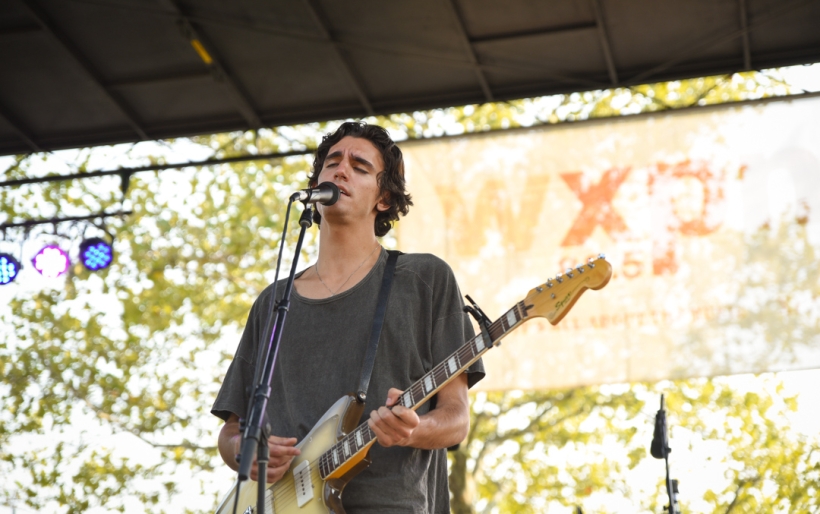 On the XPNFest Marina stage, Tamino was more than just a pretty face

The full range of Tamino’s virtuosity was on display in a stunning set at Wiggins Park.

Before the start of his set on the Marina stage, Belgian-Egyptian singer-songwriter Tamino spent most of soundcheck playing the same riff, alternating between a mysterious, melancholy suspended chord and its major resolution. That progression became the backbone for “Fascination,” the first of four songs he played in advance of an opening set for tonight’s double headliners at the Freedom Mortgage Pavilion.

When the PA cranked up his voice, it cut through like a sliver of moonlight in the daytime. He had the crowd’s full attention.

The first thing to know about Tamino is that he’s drop-dead gorgeous. His chiseled jawline, perfectly tousled hair, and distinctive eyebrows (which he apparently brushes before every show) wouldn’t be out of place on a Paris runway. When you look like that, it’s hard not to have a commanding stage presence, but his music — a blend of alt-rock, Arabic folk, and smoky jazz — was just as irresistible.

In the studio, Tamino has been joined by orchestras, Middle Eastern ensembles, and the likes of Radiohead’s Collin Greenwood. However, today’s performance was totally unadorned: just a guitar and his voice, which is a captivating, sensual, and tragic instrument. “Fascination” and the second song, “Cigar” sounded like the slowest, most lovesick Nirvana or Radiohead ballads in a way that was totally incongruous with the day’s vibe, yet somehow managed to shift the audience around them.

Trained in equal part on Umm Kulthum and Jeff Buckley, Tamino has been singing since he was a child, The full range of his virtuosity was awe-inspiring on the showstoppers “Indigo Night” and “Habibi,” both from his 2019 album Amir, where he swooped between semitones in elaborate vocal runs pulled from Arabic music. Most of his lyrics dealt with the sweet kind of pain that comes with romance, and when he hit the coluratura falsetto at the end of the hymnal, devotional “Habibi,” it felt like bliss and torture at the same time.

Even I had no choice but to stop taking my notes and stand rapt for those moments.

Tamino’s new album, Sahar, releases next Friday, September 23rd. Listen to his performance and check out a photo gallery below.