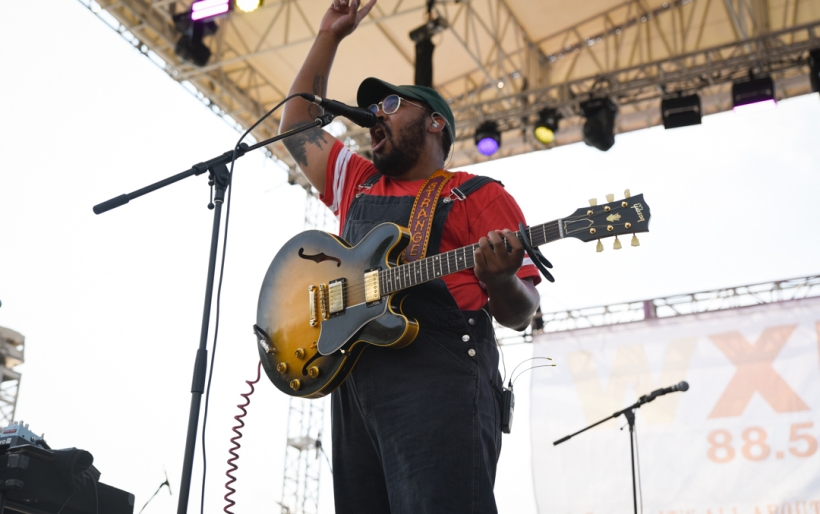 Bartees Strange played a stunning River Stage set where every song was more innovative, ballsy, and breathtaking than the last.

For about two minutes during the 3:25 p.m. show at the River stage, one could’ve mistaken the group onstage for a normal indie rock outfit. Of course, if you know anything about Bartees Strange, that’s not the way he rolls.

Strange and his overalls-clad band ran through a remarkable set of songs from his new album, Farm To Table, as well as 2020’s Live Forever, and seemed intent on both pleasing the crowd and subverting expectations at every turn. Case in point: opener “Mustang,” which kicked off as emo-adjacent rocker before launching into, of all things, a headbanging synth solo.

Strange followed up the relatively straightforward rocker with “Mulholland Dr.” and “Stone Meadows,” numbers that showed off his choir-trained voice (which can leap from raspy and rumbling to skyscraping heights) and genre omnivorousness (including, but not limited to, indie rock, pop-punk, emo, electronica, R&B, rap, and whatever the heck Coldplay is).

Then it was time for “Boomer,” his biggest single to date played for — go figure — a crowd of boomers. However, what seemed like the day’s highlight turned out to be Strange just getting started — “Boomer” kicked off a run where every song was more innovative, ballsy, and breathtaking than the last.

First, there was “Cosigns,” which recalled nothing so much as Kanye West circa 808s & Heartbreak. Strange ran his voice through some distorted autotune processing over a sequencer loop and electronic drums before the whole band burst in like a dam breaking.

Two covers of songs by The National appeared back to back. “Lemonworld” was great in its own right, but nothing could touch Strange’s rendition of “About Today” — not only the best moment of the set, but maybe of XPNFest so far. Composed of bare-bones sub bass and twinkling piano, it sounded like Kid A, and was actually on that level.

Watching Bartees Strange perform, you can tell that he knows exactly how good he is. By the closing run of songs, it felt like he was flexing just cause he could, but in the best way possible. No one can say he didn’t earn it.

Bartees Strange is playing The Foundry of The Filmore in Philly on November 18th. Listen to his performance and check out a photo gallery below.